As the Doctor once said, “there are some corners of the universe which have bred the most terrible things.” Throughout their many incarnations, the Doctor has defeated many terrifying creatures. However, some of these villains have parallels with monsters from horror stories throughout history. To celebrate Halloween, here are six classic horror monsters that the Doctor has fought! 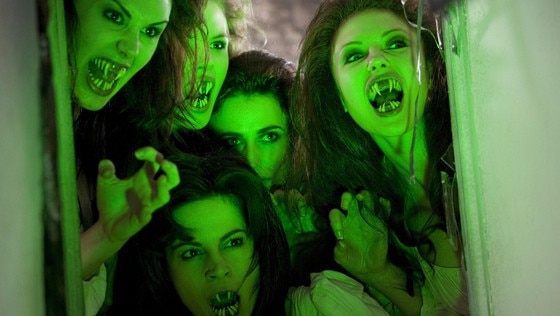 Thinking it was their last adventure together, the Twelfth Doctor took Clara on a special trip to visit the Orient Express. The reason it was so special? It was the Orient Express in space! Unfortunately, the space train was being haunted by a mummy that would kill anyone exactly 66 seconds after they first saw it. Not only was its appearance terrifying, but only the person who was about to die could actually see it. How’s that for horror?

If it looks like a vampire and acts like a vampire, is it a vampire? This was the question facing the Eleventh Doctor when he took Amy and Rory to 16th Century Venice. The city was plagued by a group of be-fanged schoolgirls who feared sunlight and had no reflections in mirrors. Vampires, right? Wrong…ish! They were, in fact, the Saturnyns, a fish-like species that could convert humans into their own by draining their blood. The Doctor accurately called them ‘Fish Vampires’, but it didn’t dampen the threat they posed!

When the Doctor, Bill and Nardole landed on a space station in the far future, little did they know they would come up against another classic horror monster, albeit one with a Doctor Who twist. The station was riddled with zombies! While their occupants had died, the spacesuits kept working. Trapped in with these shambling nasties, the Doctor had to pay a very high price to defeat them.

When shall we three meet again? In thunder, lightning or in 16th Century Southwark? The Tenth Doctor and Martha opted for the latter when they crashed into the life of William Shakespeare. Will’s life was being manipulated by three seemingly witch-like figures. They were, in reality, a species called the Carrionites, who used the power of language to perform magical acts.

The Doctor would go on to confront more witch-like creatures in 2018’s The Witchfinders, where she and Team TARDIS had to hunt the Morax, a mud-like species who also performed seemingly magical acts.

Aiming for Sheffield in the 1970s, the Doctor and Rose accidentally landed in Scotland in 1879 and stumbled across the carriage of Queen Victoria! It wasn’t the only thing that they bumped into, as they all walked into an ambush to turn the Queen into a werewolf!

The werewolf they encountered was actually an alien - a Lupine Wavelength Haemovariform, if we’re giving it its full title. The alien was powered and transformed into a wolf by the light of a full moon, but too much of a good thing could be harmful…

While this isn’t directly a classic horror monster, it is such a clear homage that we can’t help but include it!

Forced to land on the planet Karn by the Time Lords, the Fourth Doctor and Sarah Jane encounter Morbius, a Time Lord whose whole body had been destroyed apart from his brain. A body was built for him out of various corpses by a scientist who then brought it to life! Sounds familiar…