Fitting all of space and time plus all the wonders of the universe into an immersive experience is no easy feat.

Time Fracture have a huge number of team members, in front of and behind the TARDIS. Read an interview with the resident director, Fiona Kingwell, below.

Tell us about your background working in the theatre industry.

I caught the immersive theatre bug when I was working on The Great Gatsby, as a director I love innovative ways of story-telling and immersive theatre just seemed like the most wonderful playground as a creative. I studied Writing, Directing and Performance at York University and since then have predominantly worked with new writing, and often work that includes a lot of devising. I love working with actors to create and shape content, to create vivid and engaging characters and most importantly to play.

Doctor Who: Time Fracture felt like a new and daunting challenge, a massive step up in scale for me but something that seems to have fallen at exactly the right time. In terms of a world to explore, how could you ask for more?

What would a typical day in your role on Doctor Who: Time Fracture look like?

During rehearsals my day includes a lot of rushing about from space to space, passing on notes, working on content with actors, answering questions and passing on information to relevant departments. It can be quite hectic, but it's exactly the sort of mental gymnastics my brain enjoys. 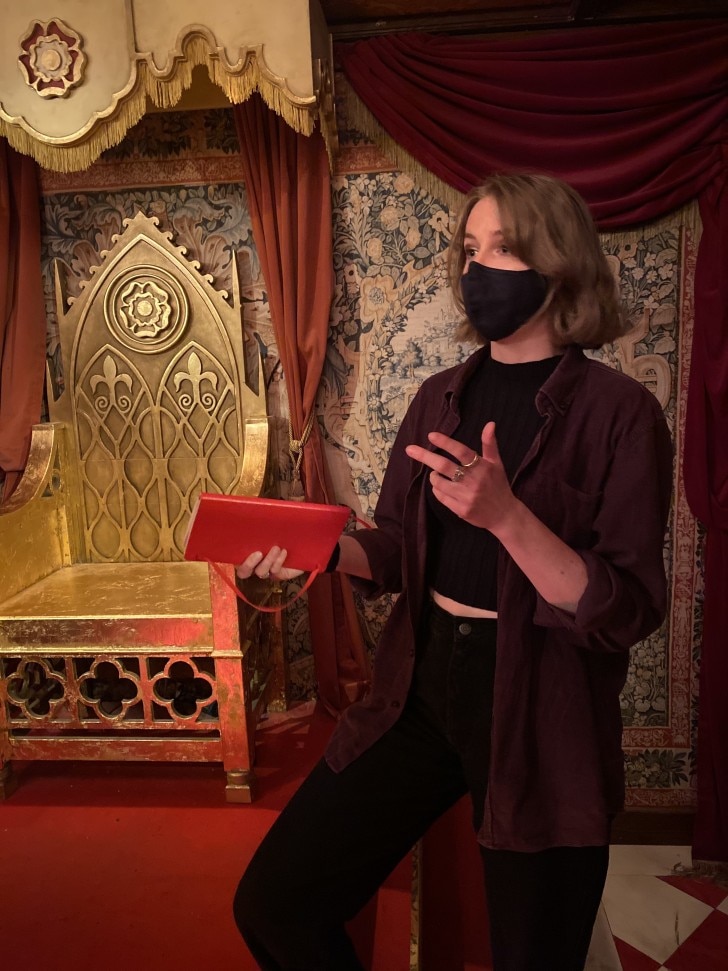 Since beginning work on Time Fracture, what has been your biggest challenge?

My biggest challenge has been starting to store all of the content of the show in my brain. 42 actors, countless characters, props, magic and madness. It’s been a big challenge getting to grips with all the ins and outs of the show, it’s like a big mental puzzle that needs putting together.

Do you have any favourite moments in the show - that are particular relevant to your work on Time Fracture?

I have so many favourite moments in the show! But I particularly love all the action that happens with Shakespeare. I have loved working with the actors who play him, and all the other actors who come and go from his study. There was a lot of fun involved in all the improvisations that sparked a lot of that content so I can’t wait to watch audiences play those games too.

Where do you take creative inspiration for your work?

My approach as a director tends to focus on the connection between psyche and body so Doctor Who: Time Fracture has been a really fun creative space to explore that. Aliens, Monsters, Humans and iterations of The Doctor, there is so much to explore and dissect and then pour into our own performances on the show.

I’ve spent a lot of time re-watching the Doctor Who cannon and have found a lot of inspiration for performance in the way characters process thought and how they show that physically. Which meant when it came to working on Doctor Who: Time Fracture we could use that to inform the way the characters in our show depict fear, excitement, love and humour.

What’s it been like working with such a huge team of creatives for Time Fracture? Have you found any particular moments where your work has complimented another persons’ work?

It has been amazing to be part of the creative team on Doctor Who: Time Fracture. Watching people who are at the top of their game has been an amazing learning experience. Rebecca Brower and her team have created such an incredible set, working with the actors to engage with and play in that space has been really rewarding. We’ve created lots of fun content that references a lot of the Doctor Who easter eggs hidden around so I look forward to audiences encountering those moments.

What behind the scenes secrets can you offer us?

There is so much to explore, but keep your eyes peeled, the set is amazing and is jam packed full of easter eggs.

Who is your favourite Doctor?

That’s a hard one, I would have to say, if I was forced to choose it would be the Ninth Doctor. Christopher Eccleston was my first proper introduction to The Doctor and the whole who-niverse so for that alone he’d have to be my favourite.

Do you prefer Jelly Babies or Jammie Dodgers?

Jelly Babies all the way. They’re a nostalgic sweet for so many people. I don’t think you can beat a green jelly baby, or ever offer them to anyone without doing an impression of Tom Baker’s Fourth Doctor.

What monster (featured in Time Fracture) scares you the most?

The Weeping Angels. Every time. I know it’s coming and yet my heart always starts pounding uncontrollably.

Have you ever tried Fish Fingers and Custard? Or, would you?

I love fish fingers, I love custard. I’ve not tried them together. But I’m willing to, perhaps just once. I feel like every time someone tries it, Steven Moffat is somewhere chuckling to himself.

Do you have any memories of watching Doctor Who on television or personal connections to the series?

My dad always referred to Doctor Who as the scariest show on television, that he used to watch it from behind the sofa when he was a kid. We’d watched a few of the classic episodes on TV when they’d aired now and then, but my dad would always mysteriously make himself busy elsewhere. When the show was revived in 2005 I immediately became obsessed. I have very clear memories of watching The Empty Child and being absolutely terrified, thinking no other storyline could be that scary, only to watch Blink and be completely proven wrong!

How do you think audiences will feel leaving Time Fracture?

Whether you love Doctor Who, or you’ve never watched an episode in your life, I think audiences will leave Doctor Who: Time Fracture feeling like they’ve just played in the most amazing world in existence. It’s a gorgeous love letter to an iconic sci-fi cannon, I hope people will want to come back again and again and see what they missed.

Want to find out more? Book your tickets for Time Fracture now