To celebrate a new beginning for Doctor Who - as award-winning actor Peter Capaldi takes the TARDIS helm - BBC America have announced a raft of special programming and theatrical events for American fans.

Before and after that, comedian and Doctor Who superfan Chris Hardwick will host Doctor Who: Live Pre-Show at 7:30pm ET and Doctor Who: After Who Live at 11pm ET following the premiere of Intruders on August 23. The pre-show and post-show will feature an array of guests in the studio including writer and actor Mark Gatiss, along with exclusive behind-the-scenes footage.

The Doctor Who Takeover Week marathon will kick off Monday, August 18, 8am ET. Starting August 6, BBCAmerica.com will give fans a chance to vote for their favorite Doctor Who episodes - the top selections of this “Make Your Own Sunday” poll will run in a BBC America marathon on Sunday, August 24.

BBC America and Fathom Events are teaming up again for two days of theatrical screening events of Doctor Who Season Premiere: Deep Breath in the US This electrifying episode will be shown in select cinemas across the US and will also include 15 minutes of cinema exclusive bonus content.

On Saturday August 23, there will be 12 theatrical events in 12 cities at 12am/midnight to celebrate the launch of the new season. More information will be announced on August 5 at FathomEvents.com.

On Monday, August 25, the celebration goes nationwide with showings at 7pm and 9:30pm (local time). The event will be presented in more than 550 select movie theaters around the country through Fathom’s Digital Broadcast Network. Tickets are now available for Doctor Who Season Premiere: Deep Breath at participating theater box offices and online at FathomEvents.com.

For a complete list of theater locations and prices, visit our Doctor Who cinema map (theaters and participants are subject to change).

And please note: We want you to have fun at these cinema events – but safety is paramount. Attending in costume is fine, however masks, face-concealing make-up, fake weapons, tools, accessories (like sonic screwdrivers) as well as any costumes that conceal what you are carrying, your natural body shape or face are strictly prohibited.

Ahead of the new season premiere, Doctor Who: The World Tour will see the stars visiting seven cities across five continents in 12 days to publicize the upcoming season. Details about the New York visit on August 14 will be announced in the coming days. More information on the itinerary for Cardiff (UK), London (UK), Seoul (South Korea), Sydney (Australia), Mexico City (Mexico) and Rio de Janeiro (Brazil) is available on our World Tour microsite. 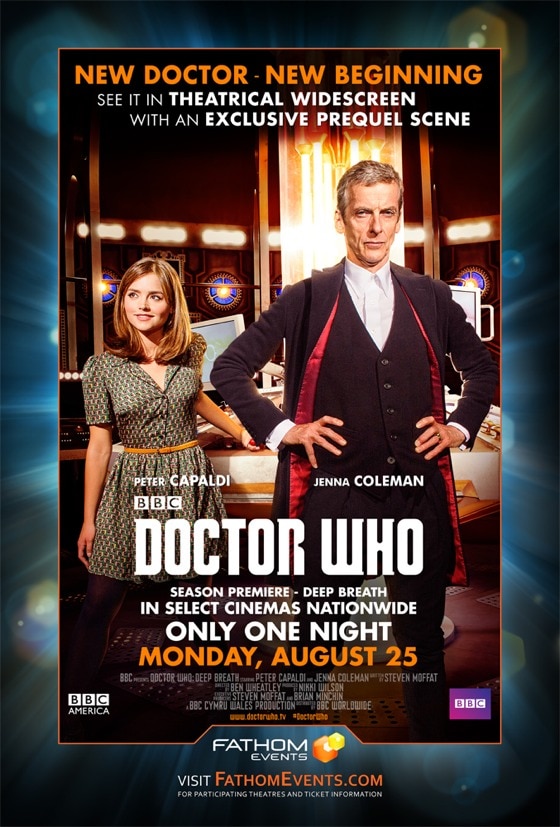