After 20 illustrious years of Doctor Who audio adventures, Big Finish have built an impressive resumé of stories, ranging from The Sirens of Time to The Legacy of Time. But ever wondered what their top releases for every year have been? Here are their 20 most popular Doctor Who adventures from two decades of time and space travel... 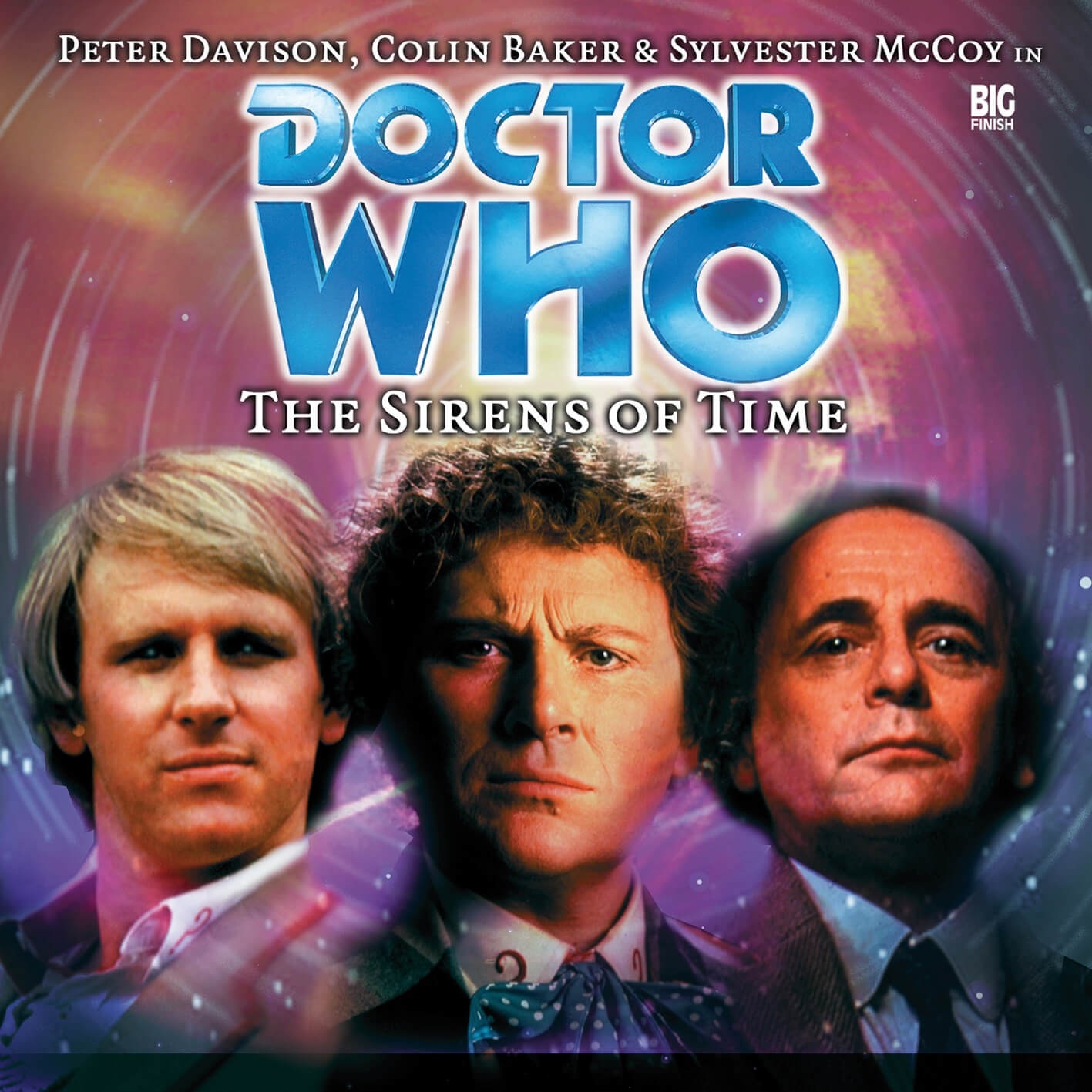 The story that started it all! Uniting the Fifth, Sixth and Seventh Doctors in a thrilling adventure against an all new foe. It’s always a joy to listen to different incarnations of the Doctor playing off each other and hearing these argue their way to victory is no different.

To celebrate 20 years of Doctor Who at Big Finish, this title is now on special offer! You can get this story for £1, just head over to Big Finish and use the access code SIRENS20.

The Daleks are back! The first Big Finish story to feature the terrifying pepper-pots from Skaro, they are as despicably evil as you’d expect. Dalek fans won’t be let down as The Genocide Machine highlights the Doctor’s oldest foes at their cunning and malicious best.

Sneaking aboard the R-101 airship and into fans’ hearts, Storm Warning is the premiere of companion Charlotte ‘Charley’ Pollard as well as the Eighth Doctor’s first audio adventure. An incredibly strong opening for both, it’s easy to see why fans love this TARDIS team and their debut story. Essential.

Get a box of tissues ready. You’re going to need them all.

An anniversary extravaganza that unites Peter Davison, Colin Baker, Sylvester McCoy and Paul McGann. However, in a shocking twist, only one of them is playing the Doctor! Zagreus sucks you in with an exploration of the history of Gallifrey, holds your attention with familiar voices in unfamiliar roles and then sends you off by kickstarting a new era for the Eighth Doctor.

The Harvest has a slightly darker tone than other Doctor Who stories and excels because of it. Another popular companion, Thomas Hector ‘Hex’ Schofield, begins his TARDIS travels here. A terrifying glimpse into an all-too believable future, The Harvest will stay with you long after it has ended.

Order The Harvest from Big Finish

Terror Firma delivers something that makes every Doctor Who fan grin from ear-to-ear - Davros at his sinister best! Sparks fly every time the Doctor crosses paths with Davros and the Eighth Doctor’s sole Big Finish encounter with the Daleks’ creator is no exception. A must listen for all Davros fans.

It’s Lucy Bleedin’ Miller everyone! The brilliant Sheridan Smith debuts as the fan favourite companion in a star-studded cast including Hayley Atwell and Kenneth Cranham! With a subversion of what you expect from a Dalek invasion, it’s a story that will keep you guessing from the off!

Order Blood of the Daleks from Big Finish

India Fisher gives a tour-de-force performance as Charley Pollard in her final adventure with the Eighth Doctor, ending an arc six years in the making. And what an ending! You won’t know whether to smile or cry.

Order The Girl Who Never Was from Big Finish

Be careful what you say, for words have a power all of their own…

Celebrating forty-five years of Doctor Who, this exciting anthology release is held up for two reasons. Not only has it got the brilliant Benedict Cumberbatch playing archeologist Howard Carter, but it also introduces the powerful and enigmatic Word Lord. Turning one of the Doctor’s greatest strengths against him, the Word Lord is an instant classic villain.

It’s the moment that fans had been anticipating since Charley Pollard started travelling with the Sixth Doctor. He’s had enough of not knowing who she is and how she knows so much about him.

She refuses to tell him how his future self will meet his apparent ‘demise’ and the tension is delightful.

The truth will out, and you can’t miss it.

Classic friends, classic enemies, just an all-round classic. Colin Baker is at his very best as the Sixth Doctor, teaming up with Second Doctor companions Jamie and Zoe to defend the Land of Fiction against the advances of the Cybermen!

Order Legend of the Cybermen from Big Finish

Frankenstein author Mary Shelley travelling with the Eighth Doctor and fighting Cybermen in 19th Century Vienna. Does anything else need to be said?

After years of patiently waiting, the many prayers of Doctor Who fans where finally answered when Tom Baker reprised his role as the Fourth Doctor for this Big Finish release. The wait was worth it – he is in top form throughout this story, revisiting the world of Nerva Beacon accompanied by his faithful companion Leela (a glorious Louise Jameson).

An ideal jumping on point that pushed the Eighth Doctor in a bold new direction. Paul McGann is pitch-perfect as a more emotionally drained and desperate Doctor pulled into another mission for the Time Lords against the dreaded Daleks. It also won Best Online Drama at the 2014 BBC Drama Awards. What more could you want?

To celebrate 20 years of Doctor Who at Big Finish, this title is now on special offer! Just head over to Big Finish and use the access code SIRENS20.

The depraved Rani burst into the world of Big Finish in a dazzling new incarnation played by Siobhán Redmond. There hadn’t been a Rani story since 1987’s Time and the Rani, so this was a long overdue arrival - and it doesn’t disappoint!

A triumphant debut. An endless war. A melancholic end.

2015 was a jam-packed year, with three titles in a tie for the top spot. The ever-brilliant David Tennant and Catherine Tate effortlessly recaptured their joyous relationship as the Tenth Doctor and Donna. National treasure Sir John Hurt owned the role of the War Doctor, giving fans the adventures of this secret Doctor they had clamoured for. Colin Baker was finally given the send-off he was denied on-screen, with the beautifully bittersweet The Last Adventure.

To celebrate 20 years of Doctor Who at Big Finish, these titles are now on special offer! Just head over to Big Finish and use the access code SIRENS20.

Double the Masters, double the trouble…

Answering fan cries for a multi-Master story, Big Finish finally pits the Seventh Doctor against two warring incarnations of the Master for the first time! Geoffrey Beevers and Alex Macqueen have never been better as the Master. A treat well worth the wait.

The Time Lords and the Daleks are at war, but the Eighth Doctor wants no part of it! With a stunning debut for Rakhee Thakrar as new companion Bliss and a perfectly executed timey-wimey opening story, Time War - Volume 1 is essential listening for anyone who wants to know what went down in the early days of the biggest war in history!

Order The Time War - Volume One from Big Finish

A master of the craft, Sir Derek Jacobi’s performance as the War Master exudes charm and menace in equal measure. The Doctor might be able to turn an army around with a mention of his name, but this Master will have you running for safety with a single word. Any word. He’s that scary.

Order The War Master - Volume One from Big Finish

To celebrate 20 years of Doctor Who at Big Finish, some of these titles are now on special offer! Head on over to Big Finish and use the access code SIRENS20.

And don't forget that this weekend, on the 20th and 21st July, the Doctor Who YouTube channel will host a 20-hour livestream marathon of audio dramas from Big Finish! Read the full details here.