In the UK at the moment, being Prime Minister is very fashionable. You can barely move around Parliament without being locked in some Machiavellian plot to become the leader of some political party or other.

Anyway, we thought you might like to know that Doctor Who hasn’t shunned the position of Prime Minister. Quite the contrary. A number of real life PMs have featured, as well as some lesser known names…

Winston Churchill
Let’s start with a biggie, and perhaps the UK’s best known, and sometimes loved, Prime Minister. A phone call from the premiere in the closing moments of The Beast Below (2010) revealed the Doctor and WC had a past, and in the following story, Victory of the Daleks, the couple share quite the jocular relationship. 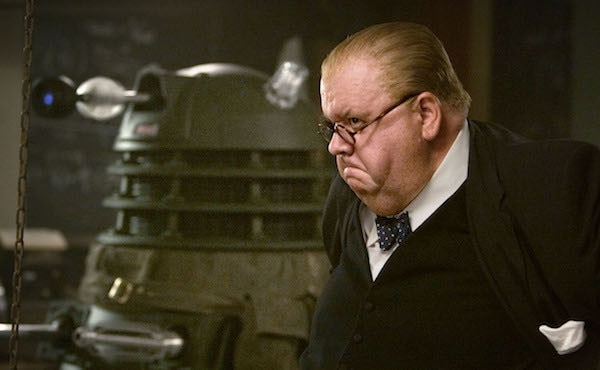 Played by actor Ian McNeice, Churchill would appear again later that year for the first part of the Series Five finale, The Pandorica Opens.

Harriet Jones
Yes, we know who she is!

But just in case you didn’t, Harriet first appeared as MP for Flydale North when the Slitheen attempted to reduce our lovely planet to molten slag in 2005’s Aliens Of London / World War III. Back then, she was a faithful back bencher but after these events she made her way to the post of PM. 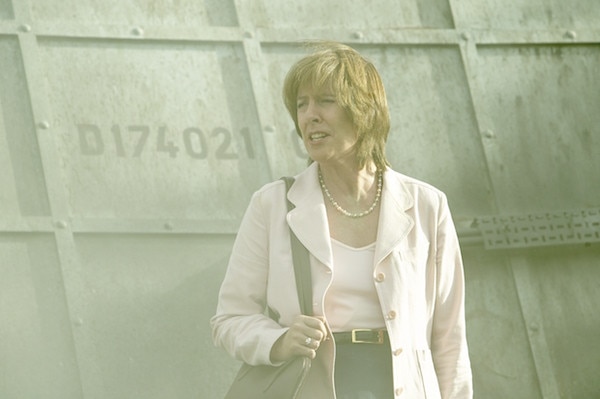 Sadly, the role went to her head. After the Sycorax were vanquished by the newly-regenerated Tenth Doctor in The Christmas Invasion (2005), Harriet decided to blow them out of the sky.

This was not to be the last of Harriet, however. In the following year’s Army of Ghosts, we learned that, in Pete’s World (a parallel Earth), Harriet Jones was presiding over “The Golden Age”.

Finally, The Stolen Earth saw a glorious return as she was stripped of all titles and now just simply Harriet Jones. She helped establish the Subwave Network in order to contact the Doctor. Sadly, Harriet was exterminated by the Daleks, though her help was invaluable for mankind. 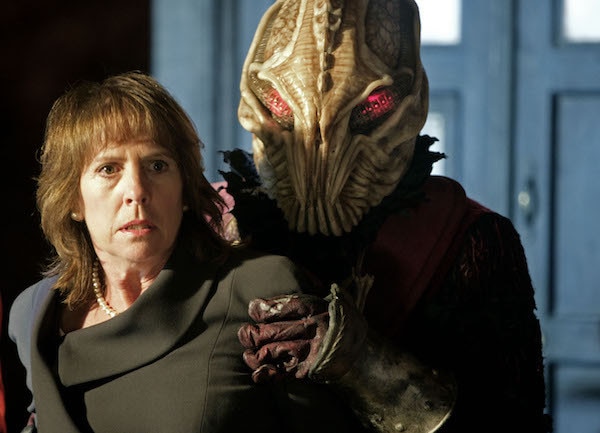 And, just in case you’re scouring Hansard for any mentions, Harriet Jones is fictional.

Harold Saxon
Another slice of fiction here as The Master, as played by John Simm, turned his attention to UK politics during Series Three and, in the finale, he became our beloved Prime Minister.

And, pretty quickly, he had the US President killed by an “alien” race (the Toclafane) on live TV and enslaved mankind by using the remnants of the last of our species from the future. 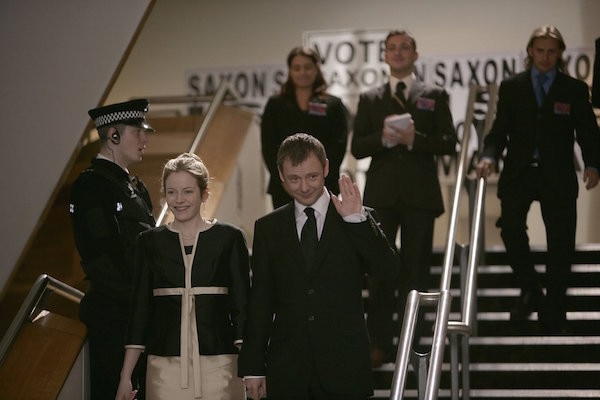 Eagle-eyed and bat-eared Who fans, however, will have noticed references to Saxon in the previous year’s episodes, Love & Monsters (mentioned in a newspaper) and The Runaway Bride (his name spoken by a soldier).

Margaret Thatcher
Surprisingly, Doctor Who predicted the future when it came to Britain having a female Prime Minister. In 1975’s Terror of the Zygons, just under four years before the dawn of the Iron Lady in Downing Street, the Brigadier takes a call from the Prime Minister and refers to her as “madam”. According to Terrance Dicks (writer of a number of Doctor Who stories in the classic era), this was an ad-lib by actor Nicholas Courtney.

(For those not familiar with UK political history, there had never been a female PM at this point.) 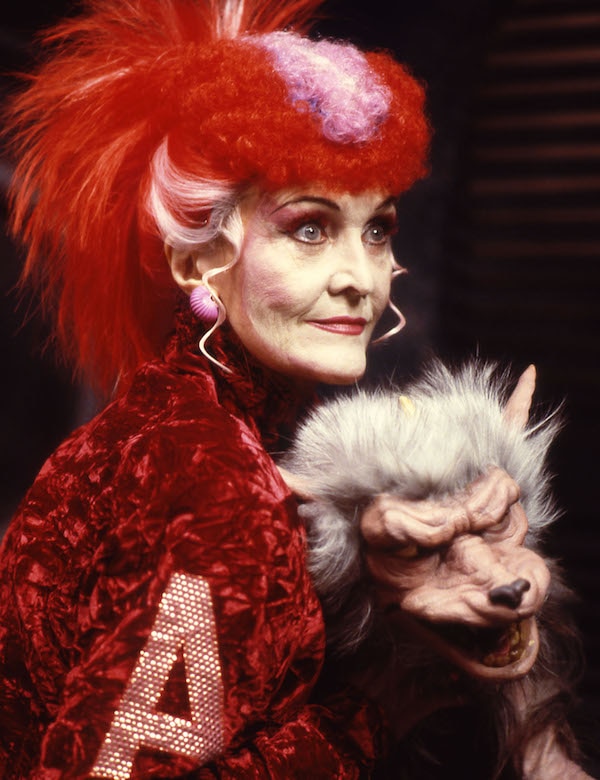 Behind the scenes, there’s even more to tell. Many years after its broadcast, the makers of the 1988 Seventh Doctor tale The Happiness Patrol revealed that Thatcher had an influence on the one of the story’s villains - Helen A (pictured above).

Writer Graeme Curry revealed on a DVD extra that he had Margaret Thatcher specifically in mind when creating this “megalomanic” character. Check out a clip from the story’s making-of documentary for more fascinating background details.

The Tenth Doctor used one word to describe Maggie in 2006’s Tooth and Claw. And that word was, “Urgh!” So there you have it!

Tony Blair
Though not explicitly referenced, the real-life PM (who was serving at the time) was intended to be in charge of the government during 2005’s Aliens Of London. Harriet Jones says, "I'm hardly one of the babes,” which is a reference to “Blair’s Babes” - a name produced by the UK press for the new female MPs created in the 1997 General Election which saw Tony tip-toe into power.

Crucially, however, producer Phil Collinson revealed that a Tony Blair “lookalike” had been hired to play the deceased Prime Minister (after being killed by a Slitheen). Sadly, for the production team, it turned out the resemblance was not quite what was promised and so shots of the body were altered accordingly. 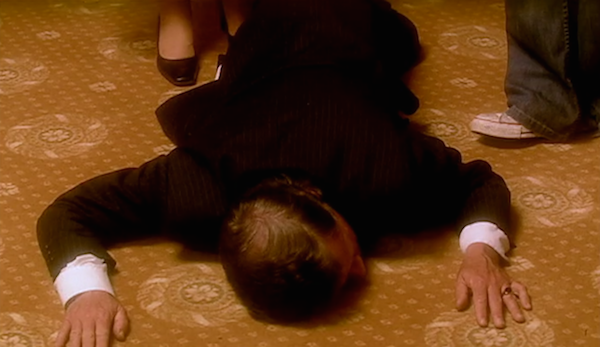 This did result in one of the Slitheen family as our Acting PM for a brief period. In the following year’s Rise of the Cybermen, Mickey suggests that the parallel world they have found themselves in is one where Tony Blair was never elected (he was still PM in real life at that time). In fact, Pete’s World, as it is also known, didn’t have Prime Ministers but favoured Presidents instead.

Jeremy
So powerful and memorable, he only had one name. Jeremy. 1973’s terrific Third Doctor ecological six-parter The Green Death saw the Brigadier, again, in contact with the Prime Minister, simply known as “Jeremy”.

(Fun political factoid - at the time, the leader of the Liberal Party was Jeremy Thorpe.) 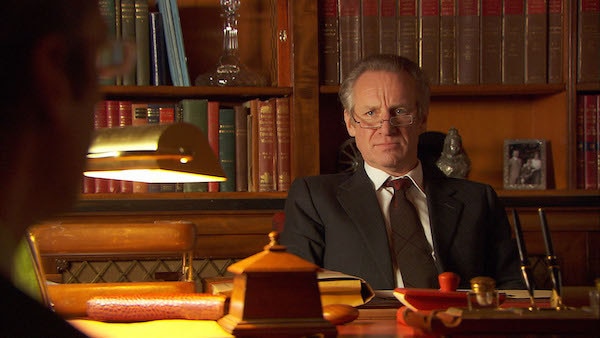 Brian Green
This Prime Minister was nasty one (pictured above). In Torchwood: Children Of Earth he “negotiated” with child-loving alien species The 456 and agreed to give them 10% of the world’s kids (thankfully, Captain Jack Harkness intervened and saved the day).

The haunting spin-off also starred a certain Peter Capaldi in a slightly more serious role than his turn as Malcolm Tucker in BBC political satire, The Thick Of It. 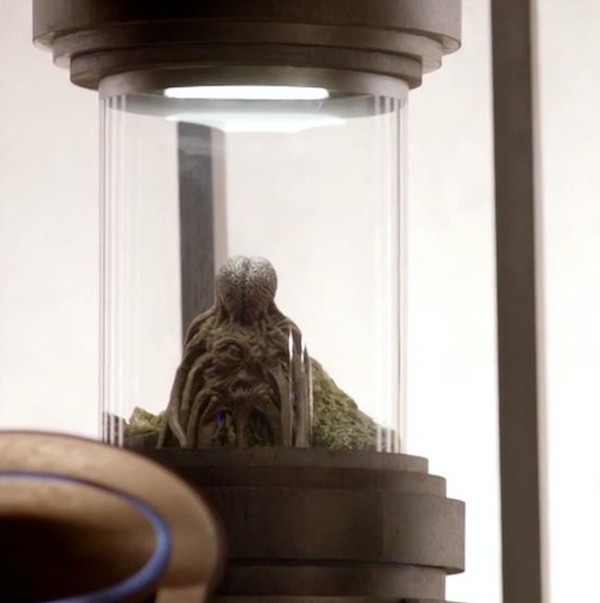 Unnamed
As discussed above, both Terror of the Zygons and Aliens Of London feature unnamed PMs.

Whilst former PM Harriet Jones was executed in The Stolen Earth, the current one was on a plane but contact was broken due to those pesky Daleks! In the same episode, writer Russell T Davies toyed with the notion of exterminating the Prime Minister at Westminster (according to RTD’s book, The Writer’s Tale).

In 2015’s The Magician's Apprentice, Clara was told that the Prime Minister was nearly put on the phone to her after UNIT contacted Coal Hill School.