To celebrate the release of Doctor Who - The Specials steelbook, we’ve picked ten classic moments from the final four Tenth Doctor stories that took us up to his regeneration into the Eleventh Doctor. Here are ten defining moments on the road from “allons-y," to “geronimo."

You can order Doctor Who - The Specials from Amazon here. 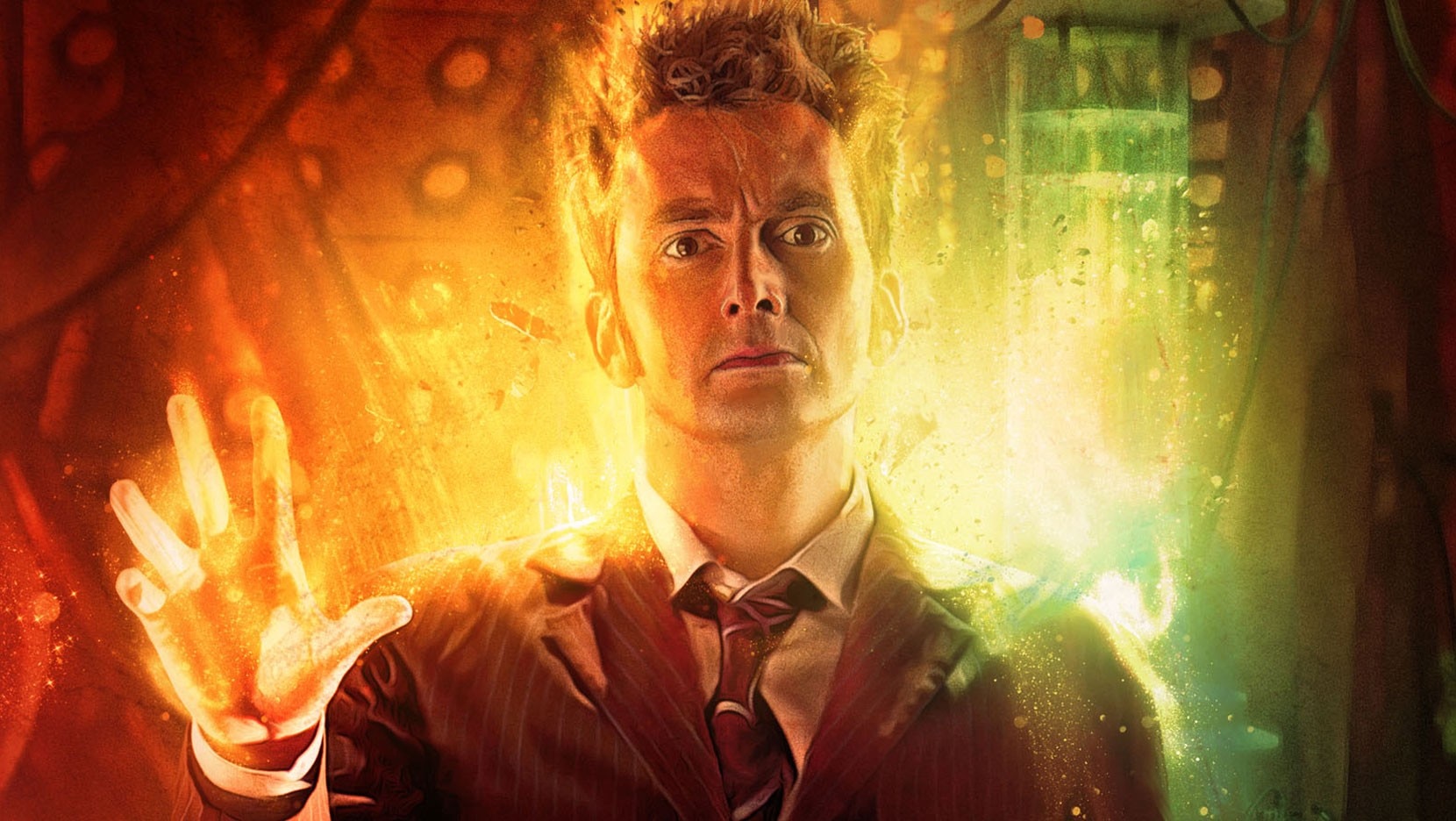 1. Meeting the ‘Next Doctor’

When did it happen? Landing in Victorian London 1851, the Doctor hears a woman crying out for help. He rushes to her aid, only for her to continue to call for “the Doctor”. Another man hurries over, tells the woman to meet him at the TARDIS and introduces himself as the Doctor…

Why was it so iconic? It had already been announced that David Tennant would be leaving the role at the end of the year, so opening with a potential next incarnation was a tantalising move. It turned out the titular ‘next Doctor’ was simply a man called Jackson Lake who accidentally absorbed all the facts about the Doctor via Cyberman technology.

When did it happen? Having liberated stolen children from the Cybermen’s factory, the Doctor’s old foes still had one trick left up their sleeve. Their factory began to rise up and revealed itself to be far more than just a mere building. It was a Cyberking - a behemoth in the shape of a Cyberman. Housing a cyber-conversion factory to convert the human race, the Cyberking began to walk over London, causing destruction with every step.

Why was it so iconic? It’s a colossal Cyberman striding over Victorian London! You can’t get any more Doctor Who than that!

When did it happen? Planet of the Dead introduces us to Lady Christina de Souza, an aristocratic cat burglar, mid-heist. She has managed to succeed in her endeavour when - disaster! - the museum alarms go off! After her getaway driver is arrested, she has to improvise. She escapes on the number 200 bus, where she crosses paths with the Tenth Doctor.

Why was it so iconic? Lady Christina would have been the perfect companion for the Tenth Doctor: clever, resourceful and more than willing to call him out when needed. The two of them would have worked together flawlessly. Unfortunately, the memories of all the companions he’s lost haunt the Doctor and he was not ready to take her onboard the TARDIS.

When did it happen? After saving the day and returning everyone to Earth, the Doctor receives an ominous warning from low-level psychic Carmen. She tells him:

Why was it so iconic? Because it set up everything. It foreshadows the return of Gallifrey from the Time War as well as setting up the death knell of the four knocks. This prophecy would haunt the Tenth Doctor in his final adventure, with fans speculating wildly about who would be knocking and why!

When it was finally revealed… it broke all of our hearts.

When did it happen? Arriving on the first human base on Mars, Bowie Base One, the Doctor knows that he has to leave. The base is destined to explode, killing everyone inside. However, something is killing off the occupants one-by-one, so the crew confiscate the Doctor’s spacesuit, trapping him in with them.

Why was it so iconic? The Flood are a terrifying creature that turns our vital needs against us. Alien-infected water is an example of a classic monster, twisting the everyday into a chilling horror. Not only is their terrifying appearance pure nightmare fuel, but they are also what causes the Doctor to remain on Mars instead of leaving straight away – and it is this delay that leads to him to something of an identity crisis…

When did it happen? Leaving the occupants of Bowie Base One to their terrible fate, the Doctor hears the Flood slowly killing the crew over his suit’s intercom. Unable to take anymore, he saves the last three members of the crew. In doing so, he changes a fixed point in time. He had stopped viewing himself as the sole survivor of the Time War, instead declaring himself the Time Lord Victorious!

Why was it so iconic? While the Doctor appeared to be doing what he does best (saving the day against all the odds), what he was actually doing was abandoning all of his principles. This was the first time we’d seen the Doctor giving in to the darker side of his nature voluntarily, and it was absolutely terrifying. He was prepared to start altering time to his whims.

With his desire to control the laws of time, it was as though the Doctor had become his old frenemy the Master. Speaking of which…

When did it happen? Summoned by the Ood, the Doctor is presented with a vision of the future, foreshadowing the return of the Master. Resurrected by a cult that worshipped him (as you do), the Master quickly takes advantage of events to replace the entire human race with copies of himself.

Why was it so iconic? After seemingly dying at the end of series 3, the return of the Doctor’s arch-nemesis was a fitting finale for the final stand of the Tenth Doctor. The Master was much more unpredictable this time, plus for the first time in Doctor Who, he had super powers!

When did it happen? Right at the end of the first episode of The End of Time, the entire human race is replaced by copies of the Master. But the biggest shock comes when we discover that the events leading up to that point had been manipulated by the Time Lords from within the Time War.

Why was it so iconic? The annihilation of the Time Lords at the end of the Time War has been a key element of Doctor Who ever since the 2005 revival. While we’d briefly seen them in a flashback in The Sound of Drums, we never thought we’d see them back from the dead! Resplendent in their iconic head dress, they were a sight we’ll never forget!

When did it happen? After fighting against the inevitability of his demise for so long, the Tenth Doctor finally accepted his fate. He went on a farewell tour, visiting all of his friends for the last time.

Why was it so iconic? This tour reminded us that we weren’t just saying goodbye to the Tenth Doctor, but to a whole era of the show. It tugged on all our heartstrings, from the happy ending for Donna to the brief reunion of Rose and the Doctor. We were having one last moment with each of our favourite characters, before we had to say goodbye to their era.

When did it happen? With no one left to say goodbye to, the Doctor is finally alone in the TARDIS. Flying away from Earth for the last time, he utters his final, heartbreaking line and regenerates.

Why was it so iconic? Every Doctor’s final moments are iconic and Ten’s was no exception. David Tennant’s delivery of his last line is perfect, and still reduces us to tears every time we watch it.

You’re going to have to give us a moment, and a whole box of tissues.

As with all regenerations, it begins by making you cry and then making you smile, with the arrival of the new Doctor. Nowhere is this contrast more apparent than with the manic first appearance of the Eleventh Doctor. The juxtaposition between the two couldn’t be more apparent; the sombre departure of Ten and the whirling joyous limbs of Eleven!

You can order Doctor Who - The Specials from Amazon here.