Steven Moffat, producer and lead writer of Doctor Who, revealed that the Doctor will have used up 12 regenerations by the 2013 Christmas special - The Time of the Doctor.

Speaking at the Doctor Who Celebration in London’s ExCel, he told the audience that Matt’s Doctor “has no more called himself the Eleventh Doctor than he would call himself Matt Smith. The Doctor doesn’t know off the top of his head how many regenerations. He never says it.”

“I specifically said John Hurt’s Doctor doesn’t use the title, therefore he’s in his 12th body but [Matt Smith is] the Eleventh Doctor.” 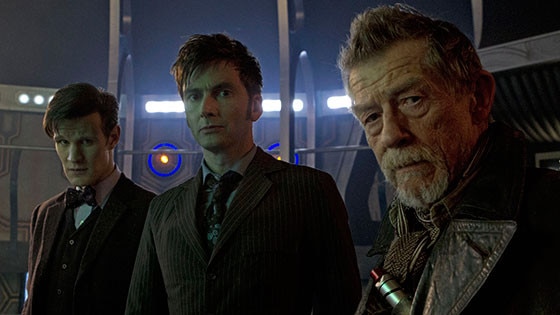 He added “However, there is no such character and never has been as the Eleventh Doctor. He’s just the Doctor, that’s what he calls himself. The numbering doesn’t matter. So I’ve given you the option of not counting [Hurt] numerically as the War Doctor."

When quizzed if John Hurt’s Doctor was the same version as Paul McGann’s, Moffat firmly said no.

“He’s used up another regeneration, so I expect he’ll be in trouble shortly.”

This refers to the line in Fourth Doctor adventure The Deadly Assassin, where it is stated that “After the twelfth regeneration, there is no plan that will postpone death” for a Time Lord.

The Doctor Who 50th Celebration is a three day event at ExCeL celebrating 50 years of the world’s longest running sci-fi drama, Doctor Who. The event welcomes over 20,000 fans to East London over the anniversary weekend and features cast and crew from the very first episode to the most recent. Matt Smith, Tom Baker, Peter Davison, Colin Baker and Sylvester McCoy lead the all-star cast and are joined by Jenna Coleman, Steven Moffat, Bernard Cribbins, Carole Ann Ford and many more.