The latest episode of Doctor Who: The Fan Show – The Aftershow features an exclusive with two huge figures in the world of Who, Mark Gatiss and Matt Lucas.

Gatiss has written numerous episodes of Doctor Who since its return in 2005, most recently Empress Of Mars, whilst Lucas plays the current TARDIS companion Nardole.

Mark told Fan Show host Christel Dee all about the origins of Empress Of Mars and how, initially, this wasn’t going to be an Ice Warriors story at all! The writer said:

“I was going to do a sequel to Sleep No More [2015 episode, also written by Gatiss] - I wanted to do a sort of Yeti thing of doing two stories about the same monster.”

In the 1960s, the Yeti appeared in two adventures with the Second Doctor, The Abominable Snowmen and The Web of Fear. Gatiss continued:

“And then… Eras are coming to an end all around us here – you can hear them crashing! I said to Steven, ‘Can I just do the story I’ve always wanted to do – the Ice Warriors on Mars?’ And he said, ‘Yes’. I didn’t have a story, that’s all I had!

It was originally going to be a bit like Carry On… Up the Khyber [1968 British comedy movie], it was going to be about a Victorian colony on Mars but actually it wasn’t really working and then I realised it was Zulu [1964 film depicting the British army battling with the Zulus] with Ice Warriors, and everything fitted into place. I’ve always loved them.”

Mark, also known to millions around the world on television as Mycroft in television series Sherlock, lamented that, despite being part of the ‘big three’ Doctor Who monsters (which also include the Daleks and Cybermen), the Ice Warriors had only made four main appearances on television before their return in 2013:

“I brought them back for Matt Smith [in the Eleventh Doctor episode, Cold War], I think they’re a great monster – a really cool design and it’s a good idea. But, also, what appealed to me was the amount of space around them to invent stuff because there wasn’t much written down, there’s not much backstory. So, I’ve had a lot of fun doing that.” 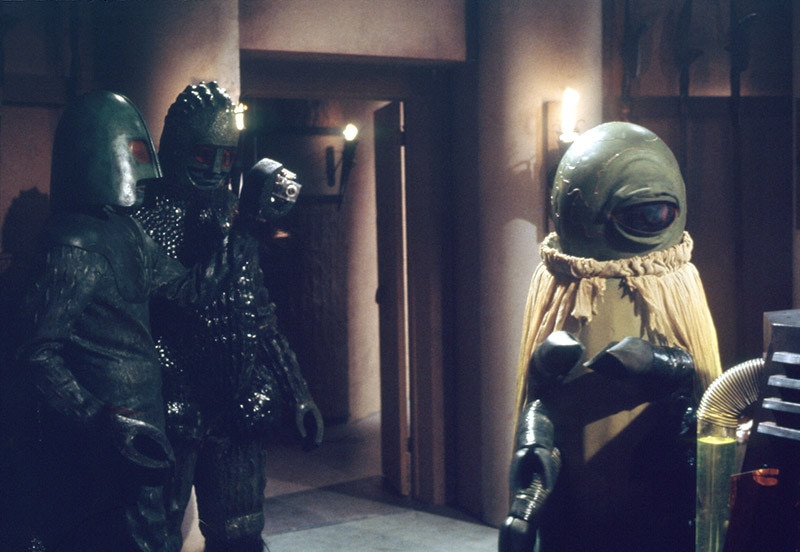 Gatiss spoke about his love for the Third Doctor story The Curse of Peladon (pictured above) and its influence oh him; it very nearly was the basis for Empress Of Mars and a comment on Brexit:

“The Curse of Peladon with Ice Warriors, 1972, is about Peladon joining the Galactic Federation and it is a very gentle satire about Britain joining the Common Market [now known as the European Union]. And, by extraordinary coincidence, into my lap fell the coincidence of writing an Ice Warriors story as we leave!

Originally, I did think maybe this a third ‘Peladon’ story about Peladon pulling out but it now survives only as a joke: the Doctor says that this is the beginning of the Martian golden age and the Galactic Federation, everything goes fine until the planet Peladon decides to take back control. So there’s a little reference to it.”