As an exclusive Christmas treat, our friends at Titan Comics have produced a very special present - a Doctor Who short story.

Not only that, it's a short story that also gives the Ninth Doctor, as played by Christopher Eccleston, a Christmas Special of his very own.

We'll have some more exclusive material from Titan Comics over the festive period, so do pop back each day of the holidays.

Check out the Ninth Doctor Christmas special below...

DOCTOR WHO: THE NINTH DOCTOR

Rose clung to the shuddering console. It was either that or be thrown across the TARDIS control room. At the moment, she didn’t know which was the better option.

“We’re being dragged out of the Vortex,” the Doctor yelled back, as sparks rained down from the cluster of tubes and cables above the central column. “Some kind of tractor beam.”

“Can’t you do something?” Tara asked from the battered flight-seat behind Rose. The Doctor shot the Sri Lankan girl his most wilting of withering looks. “Oh. I hadn’t thought of that. Thanks.”

“Doctor!” Rose snapped. Tara hadn’t been travelling with them for long, and while Rose still wasn’t sure what she thought of the former UNIT nurse, she didn’t deserve the Doctor’s sarcasm, especially when the TARDIS was flying apart around them.

“Don’t worry,” he replied, snatching up a mallet and thumping the console repeatedly. “I know exactly what I’m doing.”

The Doctor’s control panel blew up in his face, throwing the Time Lord half way to the doors.

The TARDIS went into free fall, the raucous engines ten times louder than usual. Rose lost her grip and tumbled from the console, winding herself as she hit the metal floor.

It was a moment before she realised that all was calm again. The only thing still spinning in the TARDIS was her head. 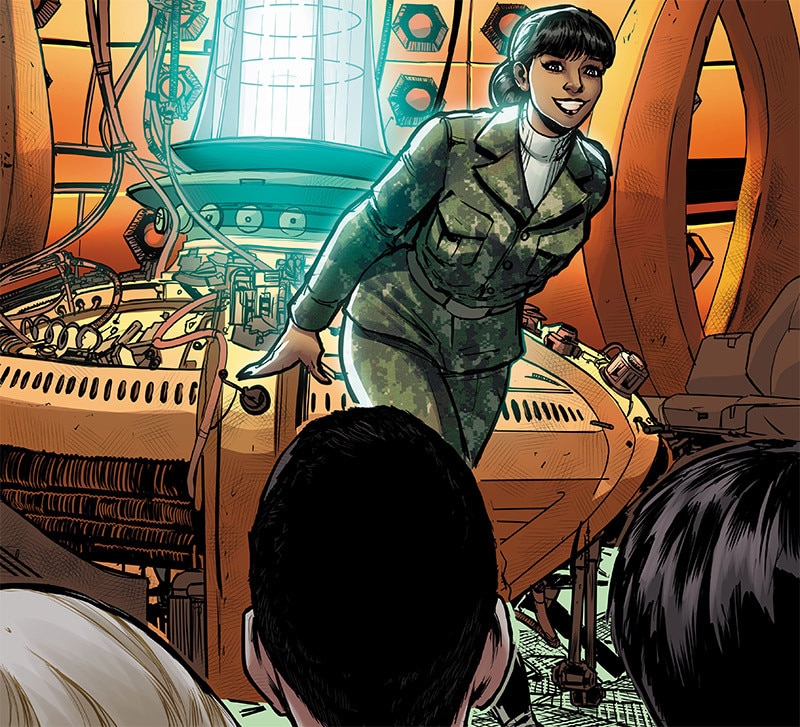 “Have we landed?” Tara asked, helping Rose back to her feet.

The Doctor was already at the console, wafting smoke away from the wrecked panel. “Looks like it, but your guess is as good as mine.”

“So much for knowing what he’s doing,” muttered Rose, giving Tara a conspiratorial smile.

The Doctor ignored her, rushing towards the TARDIS doors.

“Shouldn’t we check the scanner, or something?” Tara said, taking after him.

“Nah,” said the Doctor. “Checking’s for wimps. Trust me, I do this all the time!”

He threw open the door and stepped outside.

That’s when the first tentacle wrapped around his waist.

“Doctor!” Rose shouted, as he was yanked out of sight. She barged past Tara and barrelled out of the Police Box to see the Doctor struggling against not just one but nine rubbery arms.

“Oi, leave him alone,” Rose yelled. She grabbed the nearest tentacle, just as a pair of robotic pincers closed around her arms.

“Oi, leave me alone!” She told the barrel-chested security robots that had grabbed her and Tara.

“THIS WAY PLEASE,” the android barked in a monotone voice. “IT IS TIME TO TAKE YOUR SEATS.”

Rose struggled, but it was hopeless. She called out to the Doctor as they were hauled away, but he was too busy playing cat’s cradle with the tentacles that snaked around him like Boa constrictors. It was funny. If Rose didn’t know better, she could have sworn that one of the feelers was dabbing the Doctor’s furious face with a bright pink powder puff…

Rose and Tara were deposited unceremoniously on the front row of what looked suspiciously like an audience, albeit one made up of aliens of all shapes, sizes and colours.

Tara tried to get up, but found herself unable to move.

“GRAVITY CHAIR,” the security-bot explained. “TO STOP ANYONE RUSHING THE STAGE. WE DO NOT WANT A REPEAT OF WHAT HAPPENED WITH SHOWADDYWADDY. ENJOY THE SHOW.”

Lights blazed on in front of them. Rose’s mouth dropped open as she found herself looking at a kitsch television studio. When she was a kid, her Mum had got free tickets to see the Des O’Connor Show being recorded. This set was nearly identical, except for the hovering cameras operated by robots the size of dolls. There was a large chair, presumably for the host, next to a long red sofa. Drinks were already poured on a low glass table and the glitzy studio walls were strewn with garlands. The festive scene was completed by a large holographic Christmas tree sparkling with thousands of fairy lights. There were even what looked suspiciously like snow machines just a few metres from their seats. 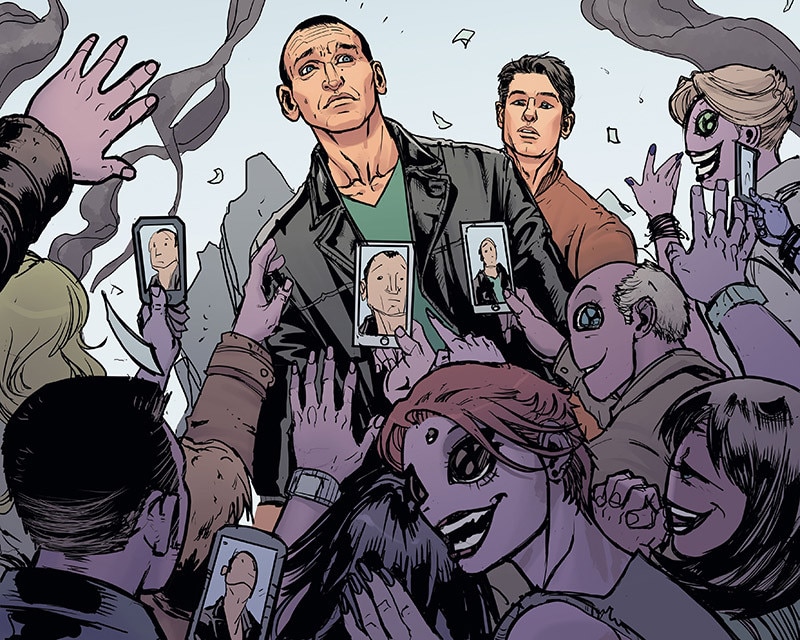 “It can’t be,” said Rose, as a tall green-skinned alien bounded onto the set. The audience went wild as the creature waved to her fans with long, curved claws.

“A Slitheen we met not long ago. A con-man. Well, a con-girl… It’s kind of complicated.

“Thank you, thank you,” the Slitheen preened, playing to the crowd. “And welcome to The Slist Show Christmas Special!”

A fresh round of applause burst from the audience.

“I’m so glad you could join us,” Slist continued, a camera swooping down to zoom into her smiling face. “We’ve a sack-load of Chrimbo treats this evening, including a live performance from none other than Hattie Munroe and the Space Pirates!”

The Slitheen nodded as the crowd showed their appreciation.

“But before that, we have a very special guest. Ladies, gentlemen and gender-neutral entities, please put your hands, tentacles and/or claws together for… the Doctor!”

Rose and Tara shared a worried glance as a door slid open near the Christmas tree and the Doctor was thrust into the limelight. He turned on his heel, looking around himself in bemusement, before his blue eyes fell upon the Slitheen who was standing with her arms held open as if expecting a hug.

“Slist? Slist is that you?”

“Who else would it be?” the Slitheen replied, ushering him towards the overstuffed sofa. “Come, come. Make yourself comfortable.”

The Doctor played along, scanning the audience as he sat beside Slist. His eyes met Rose and he silently mouthed: Are you OK?

She nodded as Slist shuffled a set of interview cards in her claws.

The Doctor turned to Slist with a question of his own. “What is all this?” 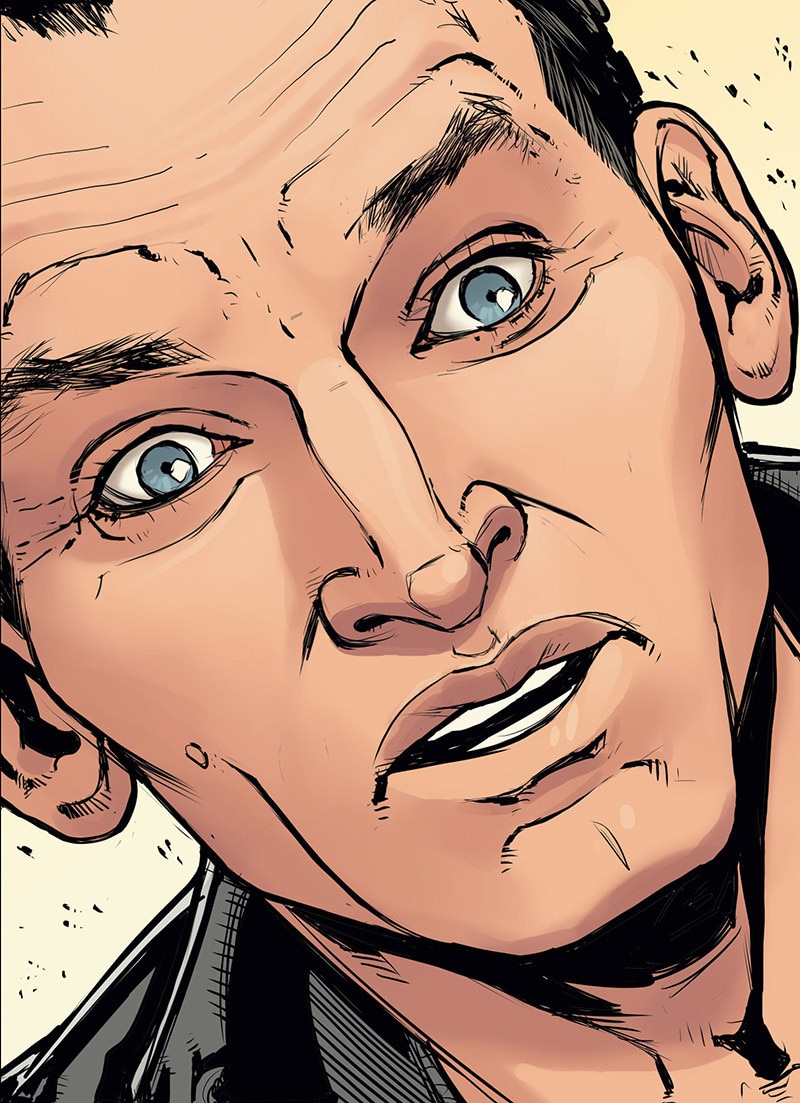 “What is it? Why, Christmas, of course, you big silly!” Slist threw her arms wide, nearly taking out one of the Doctor’s eyes with her claws. “Oops, sorry! You’ll have to forgive me. I get so excited at this time of year. All the lights, the carols…” She leant towards the Doctor and grinned. “… the record-breaking ratings!”

“You’ve got your own chat show,” the Doctor said, shaking his head. “Of course you have.”

Slist laughed warmly. “Well, you did help me broadcast my face to the entire galaxy. I thought you would be pleased. Finally, I’m being myself.”

Slist waved the barb away. “Come now. It is the season of goodwill after all, which is exactly why we invited you as our special guest.”

The Doctor’s eyebrows shot up. “Invited? Is that what you call it?”

Slist ignored him, turning back to the camera. “Our next guest is someone the Doctor hasn’t seen since he toppled their regime, and shot them through a rift through time and space.”

Rose shifted in her chair. This didn’t sound good. On set, the Doctor agreed.

“Slist,” he said, leaning forward on the sofa. “Who are you talking about?”

The Slitheen winked at the camera. “You know him best as the Butcher of Barakanamor, the man voted War Criminal of the Millennium four times over…”

“That’s right,” the host said, rising from her chair. “It’s General Yolaktorin of the Retjarvik-Sattavarian!”

The Doctor was on his feet in an instant, grabbing her arm. “Slist,” he hissed, the microphone just about picking up his words, “you can’t be serious! Yolaktorin is a madman; a tyrant.” 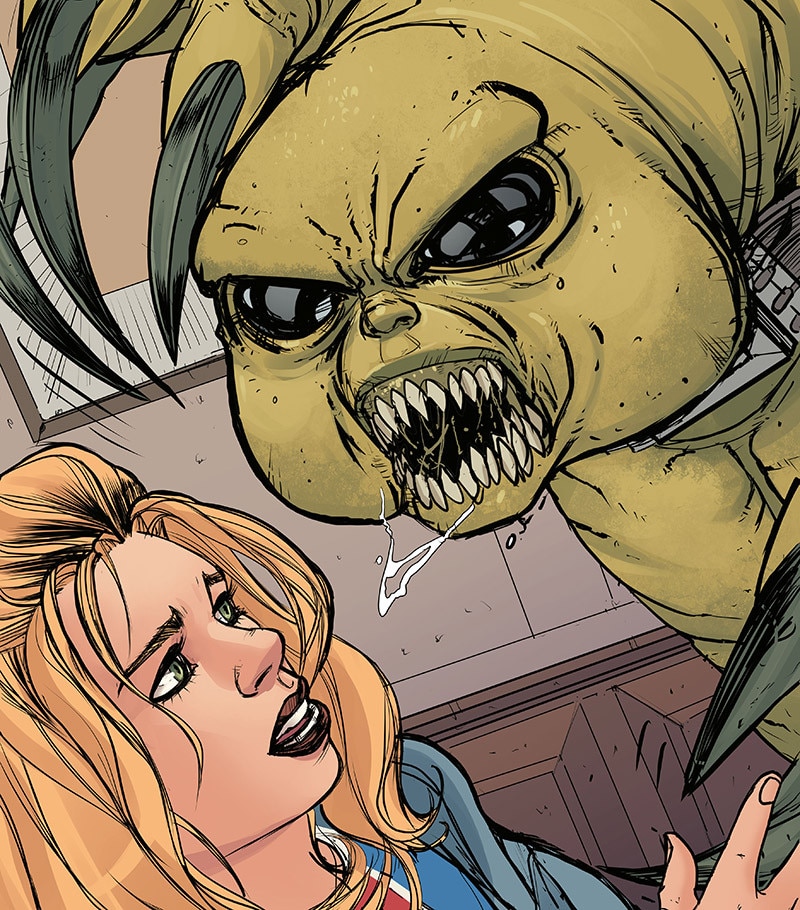 “Come now, Doctor,” she said, throwing off his hand and addressing the camera.

“Christmas is a time for forgiveness! Let’s see if you two can bury the hatchet live on TV!”

“He’s more likely to bury the hatchet in my head!”

But it was too late. The doors slid back again to reveal a colossal figure wearing heavy battle armour. The audiences whooped and cheered as the former despot snarled at the welcome, revealing a row of serrated, stained fangs. If he ever found himself in a police line-up, Yolaktorin could easily have been mistaken for the Devil, from the curved horns on his gigantic head to the pointed tail that squirmed like a snake behind his hoofed legs.

“General!” Slitheen said, beckoning the giant onto into the light. “Don’t be shy. Come and join the Doctor on the sofa!”

“Doc-torrrr,” Yolaktorin growled and swaggered forward, all muscles and murderous intent. No sooner was he in the glare of the spotlights than the Retjarvik-Sattavarian threw back his head and let loose a blood-curling roar.

To her credit, Slist put herself in front of the Doctor, extending a long arm to protect her star guest. “Perhaps this wasn’t such a good idea after all. Let’s go to a commercial break.”

The General lunged towards the sofa, still bellowing.

“What?” Slist said as the Doctor and ran to Yolaktorin who dropped to his knees, his claws raking the studio floor. Rose glanced up to a monitor as the cameras zoomed in on the monster’s skin. It was steaming beneath the studio lights, ulcers bubbling between the General’s scales. 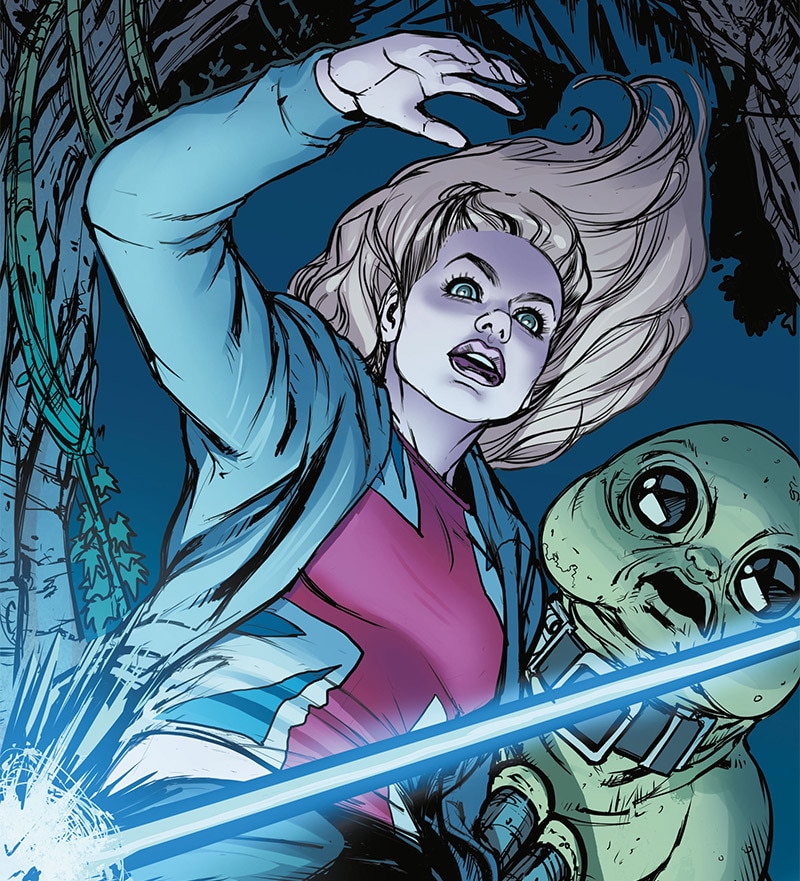 The Doctor’s sonic screwdriver buzzed as he scanned the Retjarvik-Sattavarian. “It’s his make-up, reacting to the lights. Kill the lamps! Now!”

Slist was already deep in conversation with her producers, one of her claws to her earpiece. “You heard the man! Shut everything down! I don’t care if audience-appreciation figures are going through the roof! It’s Christmas! We can’t have someone melt in front of a live studio audience.”

“Too right,” said the Doctor, swinging his glowing Sonic around to face the crowd.

With a roar, the snow machine surged into life, pumping tons of fake flakes into the air. With another buzz of the Sonic, the Doctor released Rose and Tara from their seats, telling them to point the machines at the General. Rose was there before Tara, twisting the snow cannon so the writhing alien was smothered in a heap of polystyrene balls.

Tara ran to the Doctor’s side and, scraping away a handful of snow, examined Yolaktorin’s blistered hide. “He’s badly burnt, but at least his skin’s stopped sizzling.”

“Because he’s no-longer exposed to the light,” the Doctor said, turning to Slist.

There was the sound of slithering tentacles to the side of the audience and then a shout as the studio’s burly security-bots grabbed the fleeing beautician.

“Bring her out here,” Slist yelled, but the Doctor put his hand on the Slitheen’s arm.

“Suffered?” Slist blustered. “She nearly killed one of my guests.”

“The dictator who butchered most of her race.”

“She’s a Chapadio. I should have realised when she was applying my foundation. Yolaktorin nearly eradicated the Chapadio during the first year of his reign. Tell me - who suggested having the General as a guest?”

Slist’s shoulders slumped as she looked to the ground. “She did. The network’s going to cancel us for sure.”

“Serves you right,” the Doctor said, as a camera whirred in front of his face, trying to get a reaction shot. “And as for you lot at home, haven’t you got something better to do than sit on your backsides watching the box? It’s Christmas. Have a family argument or something. Fa-la-la-la-la!”

And with that, the Doctor pointed his Sonic Screwdriver at the camera and TV screens all over the galaxy switched off as one.