ITV have announced that the third and final series of the critically-acclaimed and ratings success, Broadchurch, has begun filming today.

Starring in the show is Tenth Doctor actor David Tennant whilst its creator and writer is Chris Chibnall - the man who will take over as Doctor Who boss after Steven Moffat leaves the position.

David Tennant reprise this role as DI Alec Hardy and is again joined by fellow Wholumni Olivia Colman (2010's The Eleventh Hour) playing DS Ellie Miller and Rory Pond himself, Arthur Darvill (Vicar Paul Coates) and are joined by actress Sarah Parish, who played the Empress of the Racnoss in the 2006 Doctor Who Christmas Special, The Runaway Bride.

Pictured below are David Tennant and Olivia Colman on the first day of shooting Broadchurch Series 3, courtesy of ITV Pictures. 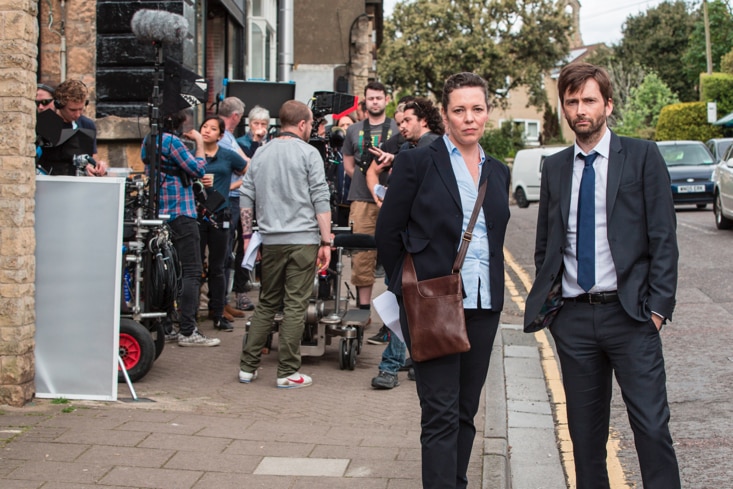 The new series will herald a brand new case for Miller and Hardy, with the detectives reuniting to investigate a serious sexual assault. Broadchurch’s final chapter looks at the emotional cost to all of those involved and the irreparable damage to friendships and relationships.

Future Doctor Who showrunner Chris Chibnall says: “This is the final chapter of Broadchurch.

We have one last story to tell, featuring both familiar faces and new characters. I hope it’s a compelling and emotional farewell to a world and show that means so much to me.”

Broadchurch Series 3 will air in 2017 on ITV