The Daleks invade Earth, and you have to help them, in this Doctor Who-themed version of the classic empire-building game, Risk.

Earth. Early 20th century. The planet has faced many invasions in the past, but never has mankind faced an assault like this, as multiple Dalek armies descend from the skies, seeking to destroy one another and conquer the world.

You must chose to play as one of five waring Dalek factions - competing against each other to find an ancient and all-powerful artefact, hidden somewhere on Earth. Whoever succeeds in finding it will reign supreme across the universe. 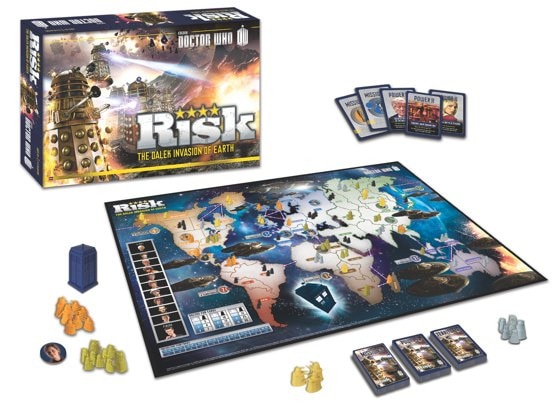 But naturally, as the Daleks fight for supremacy, the Doctor is present to stop them, bringing peace to a different territory each turn. And if your army is not victorious by his eleventh regeneration, then the battle is over - the Oncoming Storm has saved the Earth.

For 2-5 players, aged 10+, Risk: The Dalek Invasion of Earth lets players fight as either black, bronze or silver Daleks of the classic design, or red or yellow New Paradigm Daleks. But watch out for the TARDIS, sweeping across the board, defending the Earth!

With special power cards to boost your forces or destroy your plans, and special missions to defeat other invading forces, this game of Risk is an epic battle for control of the Earth...and the universe.