One thing the Doctor has learned whilst travelling the universe is that you shouldn't always judge by appearance. Some of the most hideous-looking creatures in the cosmos can turn out to be amazing allies – and some of the cutest can be an absolute nightmare! 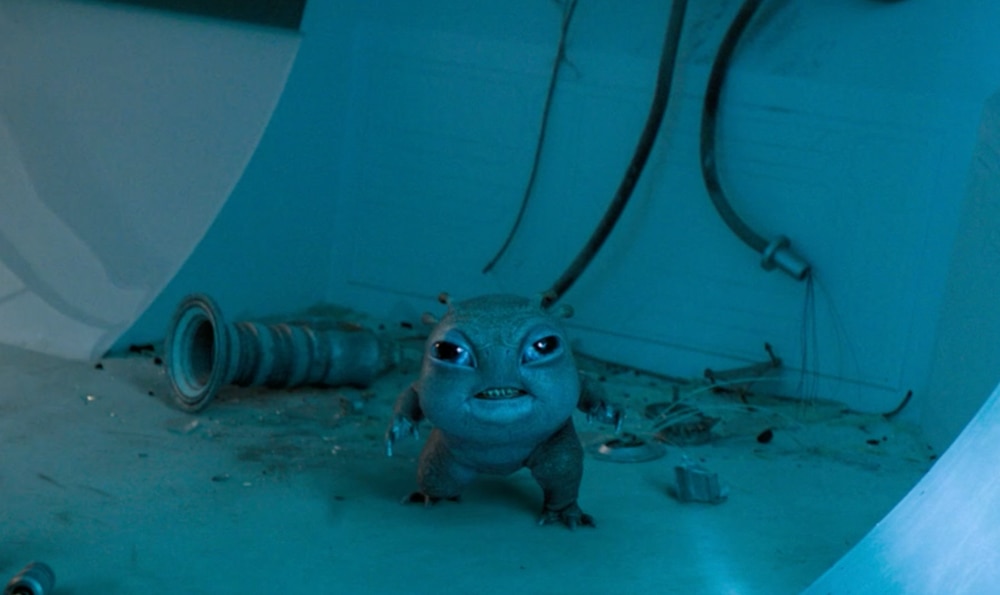 When Adipose Industries claimed to have invented a weight-loss pill that would cause excess fat to “just walk away”, it seemed too good to be true. The Doctor’s pal Donna Noble certainly thought so. She visited Stacy Campbell, a woman who had been taking the pills, for a nosey – and got more than she bargained for. Stacy went to the bathroom, where a cheerful, grinning little creature popped out of her fat and started wobbling around. Gross! Things soon got worse – her whole body transformed into loads of Adipose babies, who then literally walked away. All that was left of poor Stacy was a pile of clothes on the floor.

One of the Doctor’s best mates of all time wasn’t strictly speaking a person at all – he was a robot dog! The first K-9 was built by Professor Marius in the far future when he wasn’t allowed to take his real dog into space. The Prof souped up his computer canine with incredible intelligence – and a powerful laser weapon built into his nose! The Doctor later built several more of these canine cuties for himself and his friends. The most recent version of K-9 still lives with the Doctor’s friend Sarah Jane Smith in Ealing, helping her to fight monsters and protect the Earth from a secret base in her attic.

Don’t be fooled by the big, sad eyes of the Slitheen – they’re a family of ruthless space bandits who will stop at nothing to turn a profit! The Doctor and Rose Tyler first met them inside 10 Downing Street, when the most notorious criminal family from the planet Raxacoracofallaparorius had managed to squeeze their portly green frames inside human skins – stolen from politicians they’d murdered – and take over the government. Their plan? To start a nuclear war, then sell off the smouldering wreckage of Earth for scrap. Not so cute now, eh?

The Doctor first encountered these hairy horrors in the Himalayas, where they were servants of a formless being called the Great Intelligence. They might have looked like big, shaggy teddy bears, but they were actually deadly robots with scary, glowing eyes. A load of them later turned up in London and ran amok on the tube. Despite their murderous rampage they were still among the better-behaved commuters.

Lucy Cartwright was a girl from 1913 who was one day set upon by a gang of scarecrows, brought to life by a criminal family intent on stealing the Doctor’s life force. The daughter of this Family of Blood then occupied her body and went on a killing spree – made all the more creepy by the fact she was still carrying the red balloon Lucy had when she was captured. The Doctor eventually trapped her inside every mirror in existence – so if you ever see a flash of red when you’re looking in one, that could be her!

The Doctor and his pals Tegan and Turlough were already in deep trouble, trapped in the depths of Sea Base 4 with a load of Silurians and Sea Devils, when their reptile foes brought out the Myrka to join the fight! This giant green beastie might have lumbered around like a pantomime horse and been generally a bit useless, but that was all part of its charm. If it hadn’t been trying to kill everyone, we’re sure the Doctor wouldn’t have been able to resist its big doe eyes, and would have happily given it a tickle behind the gills. OK, it would have electrocuted him with its powerful internal charge, but it would have done so in a loveable way.

When humans colonised Gliese 851, they used swarms of tiny robots called Vardies to do their work for them. They needed a cheerful, friendly interface to help people using them, and that’s where the Emojibots came in. The Vardies were designed to keep humans happy at all costs, but the Emojibots took this too literally, killing anyone who wasn’t happy all the time. Anyone who met one and saw their smiling emoji face turn into an angry scowl was in big trouble! The Doctor and Bill Potts dodged the ultimate sadface fate and reset the bots so they were friendly again. Phew!

When two loads of warring Daleks had a scrap that spilled out onto the streets of London in 1963, one side had an unusual ally – an ordinary schoolgirl. The Renegade Daleks, who were fighting the Imperials to prove who was the most Dalek-y faction of all, planned to hook up their battle computer to a human mind, thinking a child's imagination and creativity would be just what they needed to gain the upper sucker. They were completely wrong and they all ended up getting blown up, but luckily this freed the the girl from Dalek control and she resumed her normal life.

New Earth in the year 5 Billion wasn't much like Earth is now , and nowhere was this more obvious than in one of the hospitals in New New York, completely run by cats! These fancy felines, the Sisters of Plenitude, were the same size as humans, and they'd picked up a few bad human habits as well. When the Doctor and Rose visited the hospital, they learned the Sisters were growing human clones and deliberately infecting them with diseases, so they could treat their "real" patients. The Doctor put a stop to it. and the cruel cats were locked up for their crimes.

The people on the planet of Lakertya did not have their troubles to seek. Not only were they enslaved by the Rani, an evil Time Lord scientist, but they also had to contend with her servants, the Tetraps, flapping around the place. These giant bats with eyes in the backs of their heads were generally pretty mean and ugly. But their leader, Urak, was a different bat when his mistress was around. Softer, kinder, handsome almost, he had a twinkle in his eyes and a lovestruck expression. Urak was utterly devoted, and would do any evil thing she asked - get a bat that looks at you the way Urak looks at the Mistress Rani. His loyalty was rewarded when the Rani revealed that her scheme would result in him being blown up along with the planet while she swanned off in her TARDIS. Love is blind, even when you have 360-degree vision.

If you're stuck on a medical ship in the 67th century, far away from your TARDIS, the last thing you'd want is to be sharing a corridor with a Pting. These innocent-looking creatures wouldn't eat you, as they're not carnivorous, but they would have a good chomp on literally everything around you, leaving you floating in deep space. In fact, a single Pting could devour an entire fleet! When the Doctor, Graham, Yaz and Ryan came face-to-snout with one on board the Tsuranga, it even tried to scoff the Sonic Screwdriver! The Doctor tricked the greedy critter into gobbling up the ship's anti-matter core, which then exploded and propelled the Pting into space. But they can survive without oxygen, so it's still out there somewhere!

Missed The Tsuranga Conundrum (featuring Pting) or would like to watch it again? You can catch up with the current series On Demand at BBC iPlayer (UK) or BBC America (US). For other regions, visit the Watch page to find out where to catch up in your territory.